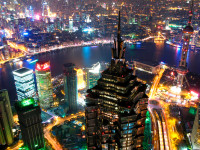 MegaCities are the Driving Force in Economic Development.In 1973, Richard J. Barnet and Ronald E. Mueller published Global Reach: The Power of the Multinational Corporations.  The authors criticized the growth and power of Multinational Corporations and their role in the American expansion abroad in empire-building and colonization.  They warned that multinational corporations are designed to exploit other nations.  They would make advanced nations richer and poorer nations poorer. The authors advocated policies to curb U.S. corporations from expanding without limits.

Had their proposals gone into effect, the economically disadvantaged nations of the world would have grown poorer, not richer!  In fact, less developed nations improve as the result of letting commerce and trade occur between the advanced and developing nations.  Developing nations need capital and investment.  Discouraging investment from flowing into needy nations is the way to keep them poor.

Megacities can be viewed as “quasi-nations” or “city states.”  Consider that in the 11th century, many cities, including Venice, Milan, Florence, Genoa, Pisa, Siena, Lucca, Cremona each became a large trading metropolis and operated with great independence.

Megacities have to form positive and mutually serving relations with several groups, including the national power, other global centers that act as rivals or allies, international organizations (World Bank, International Monetary Fund), major banks and multinational corporations. Major megacities must learn how to negotiate its various relationships and opportunities.  One of the most important groups is the entrepreneurs and companies that can assist or oppose policies.

What role does a nation play when economic development is largely in the hands of its major urban cities? One can raise a more basic question.  Why are nations needed? Can’t a group of major cities achieve their desires better without being part of a Nation. What is added by forming a nation which has the power to tax and then allocate resources among the communities according to political compromises and power blocks.

The answer is that nations create a set of benefits that otherwise would not be available to the separate megacities.  The nation can shift resources from the richer communities to the weaker communities. We call this the redistributive function of national government.  The nation also develops a history of exploits and leaders that give its people a sense of pride and purpose. We call this the heroic function of national government.   We know how people in some nations call their nation the Fatherland (Germany) or the Motherland (Russia) to give identity and meaning to the lives of these people.  And the nation serves another purpose, its defense function, in that individual cities would be subject to attack from rapacious outsiders and need to formally join with other communities into a nation that provides self-defense.

Sadly most of the world’s population over historical time has been oppressed by their national governments. Most European nations were run by a monarchy and aristocracy to serve their own interests.  Most citizens lived under feudal and subsistence conditions, with little hope of advancing their well-being.  The idea that the citizens of a nation should participate in determining its destiny—the idea of democracy—came to life 2000 years after Athenian democracy with the American and French Revolutions.

What role is played by global corporations in selecting urban cities to work with?  Global corporations moving into a new region of the world such as Asia first need to choose a nation and then an urban center within that nation to become its regional headquarters.  Often in Asia, Hong Kong or Singapore would be chosen first because these cities had excellent transportation, telecommunications, banks, and services and also had a high degree of political stability. So the power of a major urban center to attract interest and resources from relevant major corporations is key to its urban growth, even more so than its work to wrest resources from its own nation.

The bottom line is to give major urban centers the freedom, opportunity and incentive to build their own power and brand.

One Response to “Philip Kotler on Megacity Marketing”