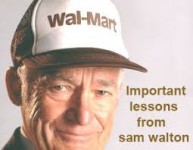 Wal-Mart is the largest public corporation in the world, the largest retail company in the world and the largest employer in the world with over 2 million employees. We all know Wal-Mart. Ninety-seven percent of Americans visit Wal-Mart at least once a year; while thousands organize against Wal-Mart expansion. What more is there to say?

For marketers, there is a great deal more to say. We are all aware of the power of disruptive technology to overturn old industries and generate new industries. The auto displaced the horse and buggy; the railroad displaced long distance carriage driving; the telegraph replaced the pony express; the telephone reduced letters; and ad infinitum with radio, airlines, television; computers and so on. But only scholars and business executives know about disruptive business models that replace old ways of making, selling and buying things with new ways of operating. Wal-Mart is the first exposure of a controversial disruptive business model. Few people know what, why and how this happened. Wal-Mart shoppers don’t have a clue. Scholars and mangers are just beginning to understand the disruptive Wal-Mart model burrowing under its wall of secrecy. I hope to shed a little light on this dark matter.

Charles Fishman wrote a brilliant journalistic account in 2006 called the Wal-Mart Effect. It was a best seller because fans and foes did not know what made this company tick. It is now 2014 and Wal-Mart’s size and impact has grown even more colossal and not much more is known about how Mal-Mart really works. Let’s get to data and see if we can discern at least part of its secret.

Wal-Mart opened its first store on July 2, 1962 in Rogers, Arkansas, a town of 5,700 people near its headquarters in Bentonville, Arkansas. Sam Walton, a former army captain with a business degree had a small chain of five and dime stores in Arkansas. From this inauspicious beginning, Wal-Mart has grown by 2014 to 3,273 Wal-Mart Supercenters in the United States, along with 510 discount Stores, 330 Neighborhood Markets and 630 Sam’s Clubs. Wal-Mart’s international operations comprise additional stores in 26 countries.

For the fiscal year 2011, Wal-Mart reported sales revenue of $466 billion, a net income $15.4 billion, and a 24.7 percent gross profit margin. The company’s international operations accounted for $109.2 billion, or 26.1 percent of total sales. Today, Wal-Mart accounts for 55 percent of U.S. grocery sales and 10 percent of all non-automotive retail sales in the U.S. It exceeds the combined sales of its four closest competitors. To bring this colossus into human perspective, the total amount spent at Wal-Mart every hour of every day is $36,000,000. Nearly every American lives with 15 miles of a Wal-Mart and most within five miles. This will narrow further as Wal-Mart builds up is Neighborhoods Markets and Express Markets in every American city and expands its ecommerce channel.

The same course of spatial ubiquity is happening in its international operations, but it will take time to reach the intensity of its American presence to every foreigner’s. Wal-Mart is the largest retailer in Mexico, Canada and several other countries; and there is no let up on Wal-Mart’s drive toward pervasive presence to global consumers.

As a merchant in poor rural areas of Arkansas, Sam Walton had a brilliant insight. He understood the paramount importance of price for his low income shoppers who struggled to pay extra pennies for brand goods. He knew the power of brands to get a premium price; but he also knew that the price pressure on these families was too great for their budget. He tried as hard as he could to find lower price brand options, always mindful that brands mean quality to customers. They needed quality goods at a lower price.

He was devoted to solve this consumer paradox of price and quality and searched ceaselessly for brand goods of decent quality at the lowest possible cost to him so he could pass on his cost savings for a lower price of goods to his customers. He succeeded and his customers responded positively to his resolute devotion to meeting their price constraints. One store led to another and volume increased. This volume growth enabled him to bargain for his brand supplies at a lower cost. With greater supply cost discounts, he was able to keep his prices to customers steady.

Here we come to his strategic insight and brand commitment. Strategically, he sought greater volume for greater supplier discounts. This could keep his low prices stable. Fortunately, Sam only had a business degree, not an MBA. Had he gone further, he would have heard the conventional formula of marketing, namely that brands carry a premium price and yield a higher profit margin to the seller than “commodity” goods, and more profit to pass on to shareholders. Since Wal-Mart was a family business, shareholder return did not press upon him. Instead of pocketing brand profit, he could pass his costs savings into capital expansion for ever greater volume and ever greater supplier discounts. He could keep his low prices steady; and even at a critical point of volume growth beat all of his competitors with the lowest price in any geographical area.

Wal-Mart shopped for lower cost quality suppliers and found lesser brands that met customer perceived quality minimums. He was too small yet to offer still lower priced store brand goods that could piggyback of quality premium of his company mark. That would come in time, when customers finally trusted Wal-Mart as the lowest price shopping destination.

The positive response of his customers to Wal-Mart’s pricing strategy drove him to open more stores across rural and metro areas and consistently follow his paradigm of high volume sales for lowest supplier cost and lowest price to customers. Volume would overcome low unit profit margins. Profit from volume growth at low unit margins would be his profit surrogate for quality brand premiums.
Now we move to the moral dimension of Sam Walton’s strategy. He would not build his fortune on the premium value of brand goods; but rather drive his entire business to one compelling objective: quality at lowest price to the customers. His fortune would come with volume, not premium price. The high volume of tiny margins to shoppers would be the key to his kingdom.

Wal-Mart overturned the conventional brand equation of price as a function of the measure of perceived quality over the quality of standard goods. In conventional branding, price is a dependent variable. For Wal-Mart, price became the independent variable. Cost of goods and quality had to be manipulated to secure the ever lower price to customers. Wal-Mart moved agilely into its own store brands, when and where it could not squeeze brand manufacturers any further; and added its own channel brand quality to the mix to compensate for any derogation of product brand quality.

How did Wal-Mart accomplish this reversal? Wal-Mart buyers went to the brands and said we will give you your premium value in volume, not price. 100,000 units of a $1.20 item for 95 cents each would be worth more to your brand, namely $95,000, than 50,000 units purchased from you at $1.00, namely $50,000. This made sense to suppliers, so they discounted…and discounted until hundred of suppliers went bankrupt after expanding their capacity to meet Wal-Mart’s enormous volume orders, until they could no longer say yes to more discount. Wal-Mart cut them off by the knees for a lower cost supplier. Many suppliers folded and a lot of manufacturers went to Asia to reduce supplier cost. America lost a lot of manufacturing jobs, customers were happy with low prices, inflation was abated and competitors were vanquished.

Sixteen cents savings to shoppers on a $1.20 item may not seem much of a discount, but if the discounted is added to a basket of other reduced prices, consumers save not pennies, but dollars. Over the course of the year, they save hundreds of dollars.

There was another way to cost his costs, beyond supplier volume discounts. If he could also reduce his operations costs, then he had a double whammy for lowest price to customers. Forthwith, the legendary Spartan modesty of headquarters in Bentonville and regional offices; the lower salaries to managers in exchange for stock options; and low wages to non-unionized store employees; but never below minimum wage. Many of his early managers became shareholder millionaires at their retirement and many store “associates” became managers.

The second third of his extra supplier discount of $5,000 went to capital expansion and operational efficiency….more stores for more volume and steeper supplier discounts; more distributions centers for lower logistics cost; better management for store motivation and sales; and better information systems to reduce overstocking and insure that the shelves were filled with what was needed.

The combination of high volume for supplier discounts and low and efficient operations enabled Wal-Mart to sustain the brand of everyday lowest price to consumers. The final third of his $500 supplier costs saving went shareholders, top management and personal fortune.

A lot of political rancor has grown to stop Wal-Mart. Unions, independent retailers and liberal citizens have organized politically to block every new Wal-Mart development. They have generally failed because consumers want low prices and they vote. The mistake of opponents has been to attack Wal-Mart for its low wages. Wal-Mart has always kept to the minimum wage. Their greatest damage has been delivered to small business retailers and to suppliers who were enticed to provide volume beyond their financial and commercial ability to sustain capital investment in greater capacity, when Wal-Mart finally said “good-bye”.
Initially these suppliers cut domestic corners and moved plant to lower cost regions in the U.S. Then they took their manufactures off-shore for lower costs. Many finally failed on foreign soil as local suppliers emerged to meet Wal-Mart’s requirements.

America has lost hundreds of thousands of small retailers in proximity to Wal-Mart; thousands of supply manufactures; and millions of U.S jobs, all in service to the brand mission of lowest price to consumers.

Competitors like Target, Whole Foods, Macys and others have managed to survive in higher income areas that Wal-Mart has not yet invaded. But Wal-Mart is coming into urban America and we will see what happens! We have yet to see what will happen to Amazon as Wal-Mart moves more forcefully into ecommerce.

In a paradoxical manner, Wal-Mart is the dark shadow of Marketing. The universe of marketing has always been value creation for the consumer. The predicate of our science has always been a fair exchange price to sellers for offered value to customers. What happens to marketing when value to the consumers subverts value to many producers and retailers? Classical marketing in a world of local boundaries did not foresee how modern distribution could break this equation. Global Wal-Mart has done this with universal volume at infinitesimal margins. The consumer is victorious over severe consequences to the national economy.

A new balance must be found. So far Wal-Mart cannot be stopped because it is fundamentally popular with voters. It is the greatest friend to the masses, now called consumers, as they struggle to make their ends meet. Political leadership must address this issue and find a solution; and marketing science must contribute to this solution.