China at the Crossroads is the theme of the Kellogg Greater China Business Conference 2013. New leadership and new economic challenges call for critical decisions. Milton Kotler will be a panelist at the Kellogg Greater China
Business Conference addressing the topic:  Is it time for my company to have a new China Strategy? Milton joins influential leaders from academia, business, and government to engage in in-depth discussions on critical decisions that China must make during an era of leadership transition and economic challenges.

03/08/2013:  “It is not enough to be profitable. Companies must also grow. In fact, if you don’t grow, you won’t be profitable for long. Staying with the same customers, products, and markets is a recipe for disaster.” Read Philip Kotler’s latest article on the MaRS Website, which helps entrepreneurs bring new and innovative ideas to the marketplace.

03/07/2013: The Nation reporting from Thailand writes: “Prof Philip Kotler, the world’s marketing guru who develops a new concept of Marketing 3.0, is here in Bangkok to conduct the greatest strategy seminar and training programme of the year. The ‘Values Driven Marketing’ event, hosted by Krungthep Turakij, is to encourage the new-era business to proceed marketing activities with focus on social and community sustainability. Read more

02/07/2013: Thailand should take the lead as the “United States of Asean” and take advantage of the Kingdom’s rich, religious culture as its selling points in branding itself ahead of the Asean Economic Community (AEC) in 2015, said marketing guru Philip Kotler. Read more

03/06/2013: The Pioneer, an English language paper in India, reports: “Marketing guru Philip Kotler will be in India in for a workshop organised by JRE Management Institute to be held on March 14, 2013. The workshop will centre around the emerging trends and tools of marketing for the future with special emphasis on digital and social marketing. Philip Kotler is going to be in Delhi after a gap of almost 15 years. His visit coincides with the growing emphasis on skilling in India as well as recognition of India as a source of high quality managerial acumen.” Read more 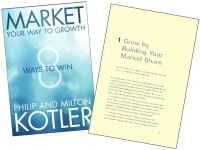 We are pleased to offer the first chapter of our book Market Your Way to Growth as a free download: